I have to say that of late I have slipped into what I would call ‘a bit of a creative slump’.  I blame an obsession with my tilt/shift lens - the fiddly adjustments for focusing can really take the spontaneity out of your work..!  Add to this a lot of printing, mounting, and framing for exhibition and sale, and photography can start to feel more like a job rather than a creative outlet.

So in the hope of kicking some new life into my work, I headed out to Dalby Forest the other day with the aim of doing something rather different.  I took the dog, and my Nikon D700 with the 80-200 F2.8D on the front, and NO tripod.  I had the loose idea of doing some Intentional Camera Movement (ICM) experiments, and maybe to play with in camera multiple exposure.

I have had repeated forays into these areas ever since the days of film.  In particular I have experimented with slowing the shutter speed right down and making sweeping moves with the camera. 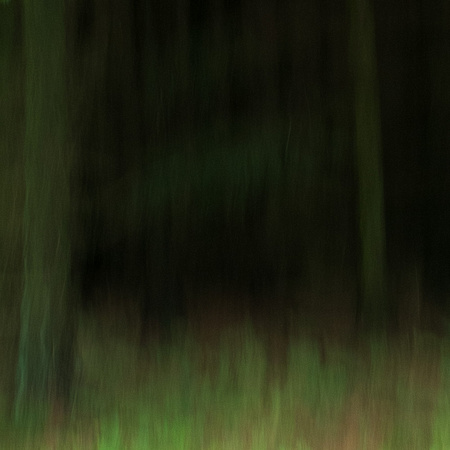 If you are shooting trees this can be effective if you sweep in a roughly vertical plane - in line with the trunks.  You end up with an impressionistic kind of ‘universal forest’ image.  Depending how much movement you use, and how slow the shutter speed is, these can become quite abstract.  With darker subjects this can produce some eerie and even disturbing images.  I would say those shown here have something of the menace of a fairytale about them, or perhaps Prokofiev’s Peter and the Wolf. 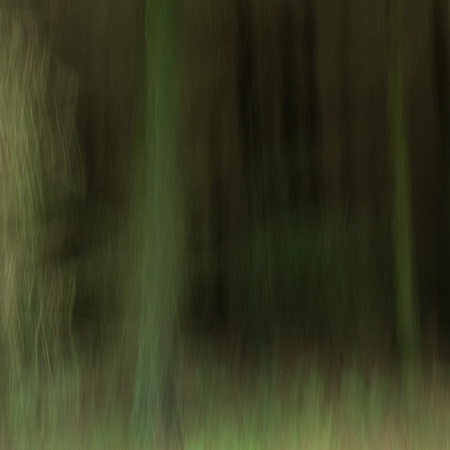 Of course these single sweep images can then be combined as layers in Photoshop to produce even more abstracted composites.  Blend modes can be used to adjust the overall image produced, and the opacity of the differing layers can be adjusted to allow one or other to show through and be dominant in the final image.

For example, the image below is a composite of several ‘sweep’ images, overlaid onto a sharp image of Autumn leaves on an ornamental cherry tree. 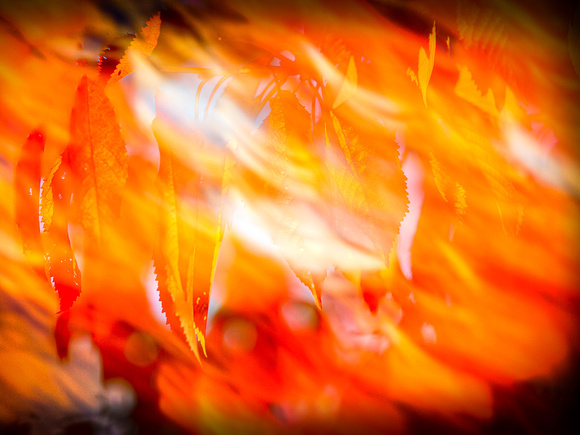 Autumn Flame #1Leaves of a flowering Cherry Tree dance in the Autumn breeze, giving a dazzling display of colour before falling all too quickly to earth

Freeing yourself from the ‘lightroom’…

However, the images above were self-consciously planned, or evolved through rounds of post processing.  What I wanted this time was something more immediate and ‘free-form’.  In particular, I took the advice of Doug Chinnery, in his excellent tutorials for On Landscape, and decided to try out the in camera multiple exposure function.

Again this is a technique which has been around ever since the days of film - whereby several exposures would be made on to one frame, by disengaging the camera’s film advance mechanism.  However, with the advent of digital you get immediate feedback on whether your experiment is working or not, allowing you to refine the movements made during or between exposures. 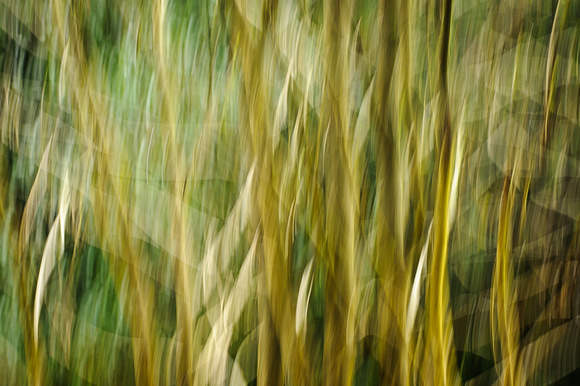 Another advantage with the digital version of the technique is that you can set the camera to adjust each successive frame for ‘gain’ - so that the composite produced is correctly exposed overall.  With certain Canon cameras you can even use differing blend modes to define how the exposures combine with one another - creating lighter and darker moods with more or less saturation in the final image.

With my now venerable Nikon D700, you are limited to a choice of how many frames to include in your multiple exposure sequence, and whether automatic gain adjustment is on or off.  In a Nikon SLR you will find the options somewhat buried amongst the shooting menus - although I have also added multiple exposure to my ‘user menu’ so that I can access it more quickly. 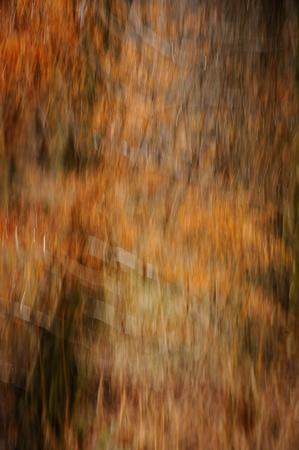 Checking the back of the camera I deleted most of the rubbish as I went along - and there was a lot..!  But, as predicted by Doug, every now and again something interesting emerged to spark the visual imagination.  And once I got this spark, I focused in on these subjects, experimenting further with a variety of different shutter speeds and movements - both in line with and in opposition to the dominant forms of the subject. 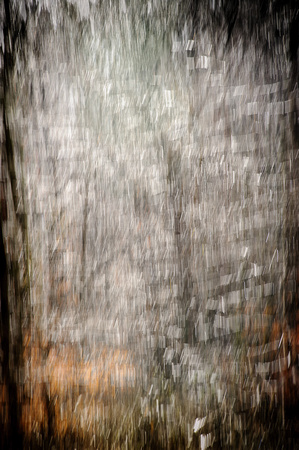 Contrast and Saturation are your friends...

For this set of images at least, I found that high contrast and/or strong colour were two of the keys to success.  By its very nature, any movement of the camera tends to attenuate the colours and tones in an image.  If you are starting with something that has a wider range of tonal values, the final blend is less likely to look like a washed out smear of colour or tone.

In addition, unless you are aiming for completely abstract colour studies, I would suggest keeping the shutter speed in the 1/60-1/15 second range.  That way the image will retain some structural elements.  I found that three shot sequences worked best for me, but this may vary from subject to subject.  I wanted to retain some level of recognisability in the images, albeit that the subjects are taken to a degree of abstraction. 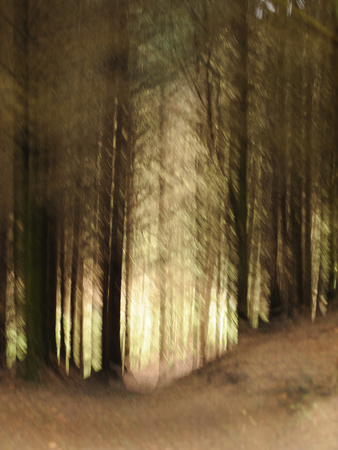 The images, from this shoot at least, all seem to share a certain 'painterly' quality - reminiscent perhaps of the impressionist movement in painting.  And the immediacy of the technique certainly chimes in with their desire to capture the fleeting moment, in the outdoors and as it happens.  However, I also find the images quite evocative and emotive - with the abstraction and 'disturbance' of the visual experience leaning more towards expressionist art, and allowing space for the viewer to bring their own feelings to bear.  The observant will note that I have titled the images - perhaps in an effort to give people something to 'hang onto' in interpreting them. 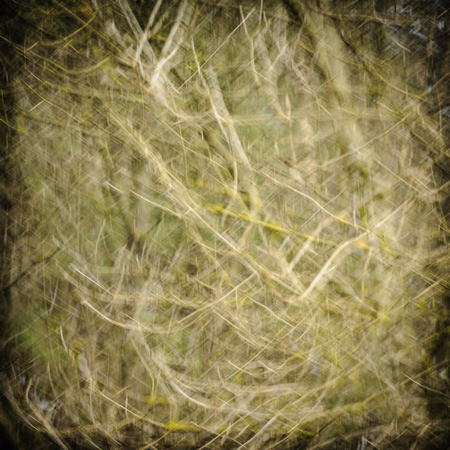 I'll leave that for you to judge.  I certainly think that the technique can produce beautiful and evocative images - although some will feel that it owes less to the technique of the photographer than the use of a camera in a visual game of 'lucky dip'.  I am certainly not going to stop taking sharply focused, carefully composed, 'classical' landscape images of grand vistas.  However, it does hi-light that there are many more ways of capturing the 'quiet beauty' of the world around us than slavishly following the 'rule of thirds'.

Personally I found it liberating to capture images that demanded little or no post processing - other than cropping and a few teaks to tone and vibrance - and that were produced in one visit, with modest equipment.  I will certainly be doing more of this, partly as a way of letting some fresh air into the sometimes restrictive discipline we call landscape photography.

All comments and feedback on the images above are, as always, very welcome.  Note that this is the first blog post I have done, so any thoughts on its format and functionality would also be welcome.  Thanks for reading..!

If you have found all this interesting and want to explore the techniques further, I would suggest heading straight over to the On Landscape You Tube Channel to watch Doug Chinnery's three video tutorials on 'Creative Landscape Photography'.   You can find them at: https://www.yotube.com/watch?v=yKoLINBLUwA

Some one else who has, through extensive experimentation, really turned these approaches into an art form is Valda Bailey.  I would recommend al to visit her website to see some really beautiful work.  You can find her at: http://www.valdabailey.co.uk